I meet a lot of amazing people through my photography.

I’m saying that because it is absolutely true.

I can arrive to an (almost) stranger’s house with my camera and leave with new lifelong friends. People that I would choose to be around, even if I wasn’t there to photograph them.

Sometimes, though, the best part of my business is re-connecting with friends from a lifetime ago. People I may have met 10 or 20 years ago. Or that I grew up with.  That I went to high school with.

It’s the most amazing thing about my business when I get to photograph my neighbor from Homan Avenue, Angela LaMantia’s kids. The Houtsma family, whose family of girls babysat me and my sisters growing up.  The kids of my friends, who are now graduating from high school or getting married. I love that I am able to re-connect with a lot of the people who have actually helped in making me the person I am today through my photography.

One of those wonderful opportunities occurred this past summer when I was able to meet up with the Simon family to photograph their daughter Lauran for her senior portraits. Her younger sister Abby was able to jump in a few photos as well.

I vacationed with the Simons more than five years at a magical place in Berrien Springs, MI called Pennellwood Resort. The same families vacationed together the same week every year, and we became really good friends really quickly.

I met Tia and Lou and became fast friends in 2003 at Pennellwood, all because I saw Lou drinking out of an O’Malley’s Monday Night Mug Club mug. The familiar 20 oz. plastic mug couldn’t have come from anywhere but my very favorite bar of all-time in Champaign, IL. I struck up a conversation with them, found out Lou also graduated from U of I, and used to hang out at O’Malley’s.

See how this works?

The fast friendship led to me shouting “I-L-L” to Lou, and him responding, “I-N-I” every single time we passed by each other that summer, and for four subsequent summers at Pennellwood. 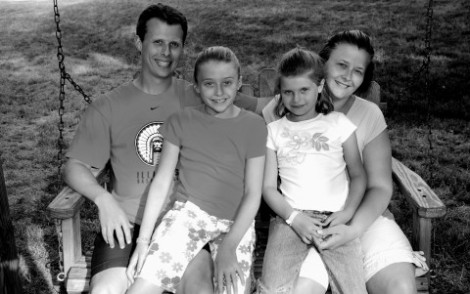 Tia caught up with me on Facebook a few years ago, and we have stayed connected in the digital world.

Lauran is graduating from Glenbard West this spring, and Tia graciously invited me to photograph her beautiful daughters. I was honored, and truly touched that they reached out to me for this important part of their family’s history.

And we had a blast.

We met at a park near their home. Lou was there with Tia and the girls, and the first thing we said to each other was “I-L-L!” “I-N-I!”

The girls are grown up and beautiful. And not just on the outside. Lauran and Abby are truly beautiful from the inside.

The photographs were so easy!

Gone were the little ponytails perched on top of their heads, that Tia used to put in their hair every summer. We called them “toodleheads” at Pennellwood. My daughters had them, too.

I spent a couple of hours with this beautiful, grown-up young lady. We ran around, and laughed and had a grand time.

They were so appreciative when they saw the images, but I really had to thank them.

Re-connecting with them for this wonderful occasion was the best thing I could have asked for that month.

And I have the photographs to prove it.